Where in the Alexander Bow tree does James belong?  We have have few details which include his three wives, his various occupations, decent census records, and his will but not much else.  From extant records we can surmise he was born circa 1812 in Massachusetts.

In 1850 he is married to his second wife and is a tavern keeper in York, Livingston County, New York.

The 1855 state census is damaged but we can read a portion of it. We can infer his young son Charles died between 1850 and 1855 since he is not enumerated. 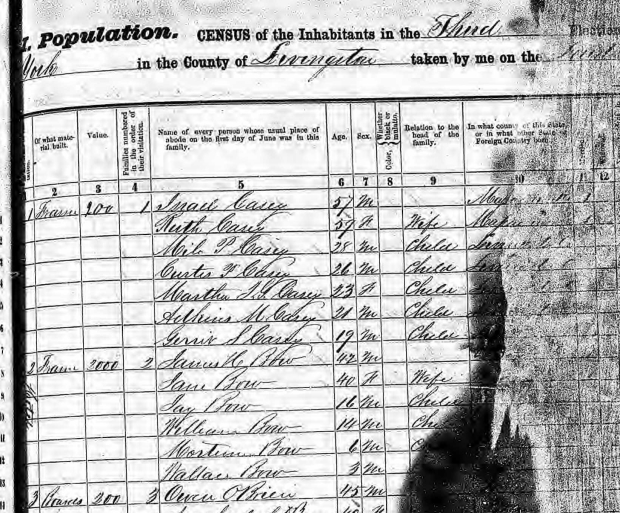 In 1860 the family has a servant named Luvina aged 18.  Is her surname really Bow or is this an error? If she is a Bow, who is she? Sons James and Mortimer are not enumerated.  We haven’t been able to locate Mortimer beyond the 1855 census; we presume he died between 1855 and 1860. 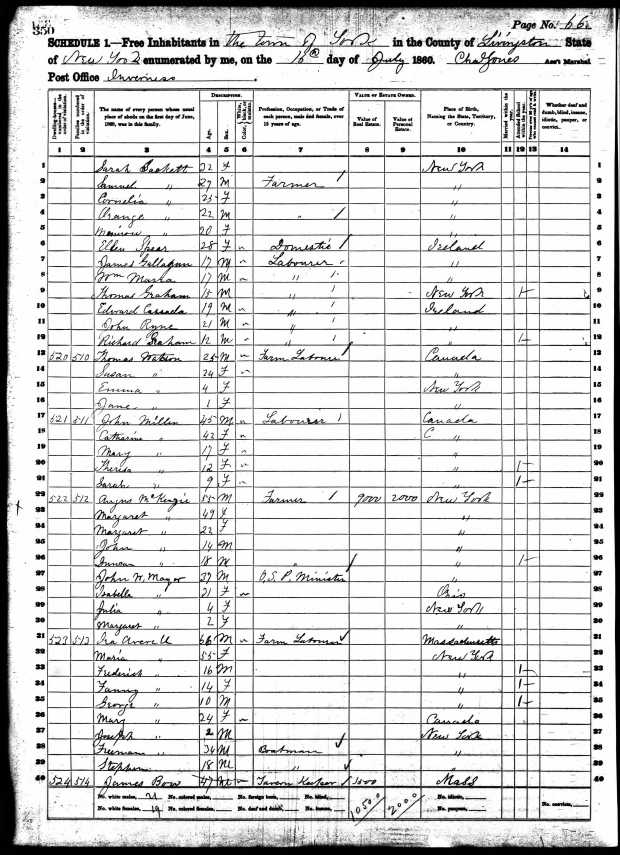 The 1865 census finds James widowed for the second time and boarding with his future wife and her parents. 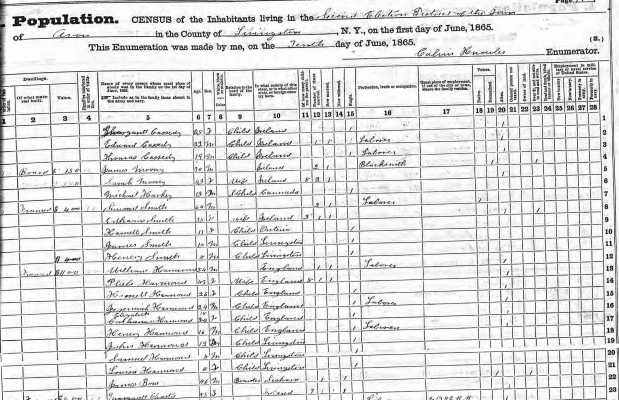 James and Harriet married in the past 5 years and now he is farming in 1870.

Farming must not have agreed with James since in 1875 he has moved into town and is a horse doctor. His youngest child has also moved back home.

1880 finds James retired and living in the same home in Fowlerville as the previous census.

His will was made more than 20 years before his death and is quite succinct.

James H. Bow is buried in Fowlerville’s Mount Pleasant Cemetery next to his first two wives.

James M. is living with the Abram Stocking family for the 1860 census.  Abram’s father Roswell married Rosanna Bow, daughter of Abraham and Elizabeth (Arnold) Bow on September 18th, 1811 in Pittsfield, Berkshire County, Massachusetts.  Is this a clue to James H. Bow’s parentage? Abraham Bow died in 1808 so James H. cannot be his son. James could be a son of Abraham and Phebe (Stanford) Bow who were married in 1810 in Pittsfield, Massachusetts.

James M. joined the Union effort during the Civil War.  He enlisted August 30th, 1862 at Rochester, New York in Company K, 8th New York Cavalry.  He was wounded during the Siege of Petersburg. 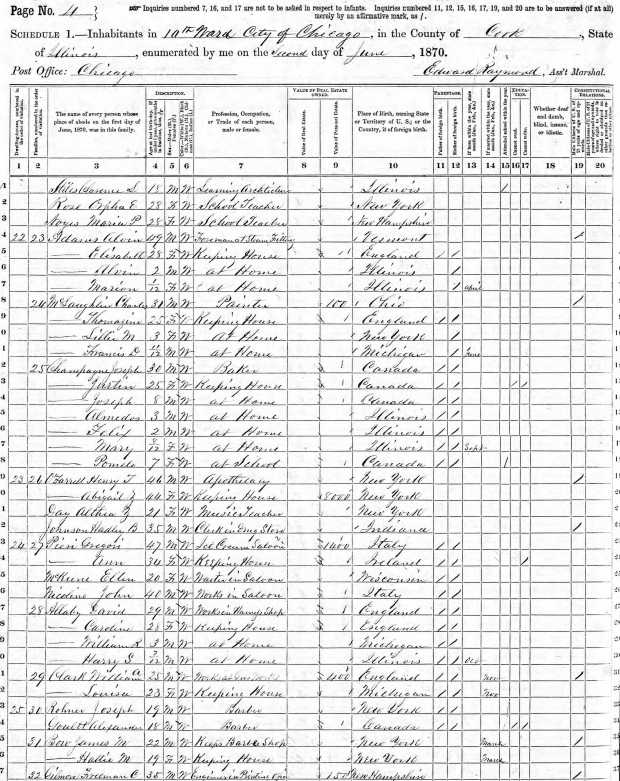 By 1880 Mattie had died and James M. had made his way west to San Francisco, California, and was retired.

The last we know of James M. is that he had died before February 24, 1891 and his father applied to receive his pension.

William served in the same Company as his brother during the Civil War.

He went to Washington Territory in early 1876 and had his livery business running by the time he ran his first advertisement in the Seattle Post-Intelligencer on July 7th. 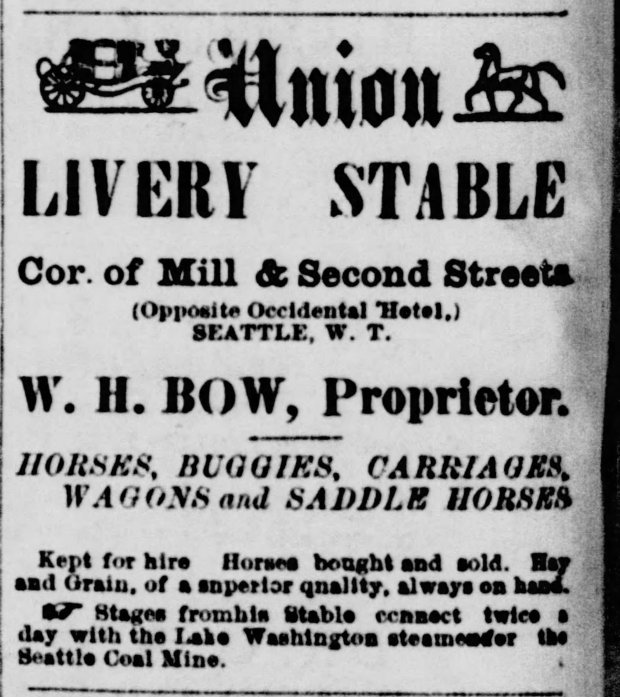 Their second child, Earl, died at only one month old. 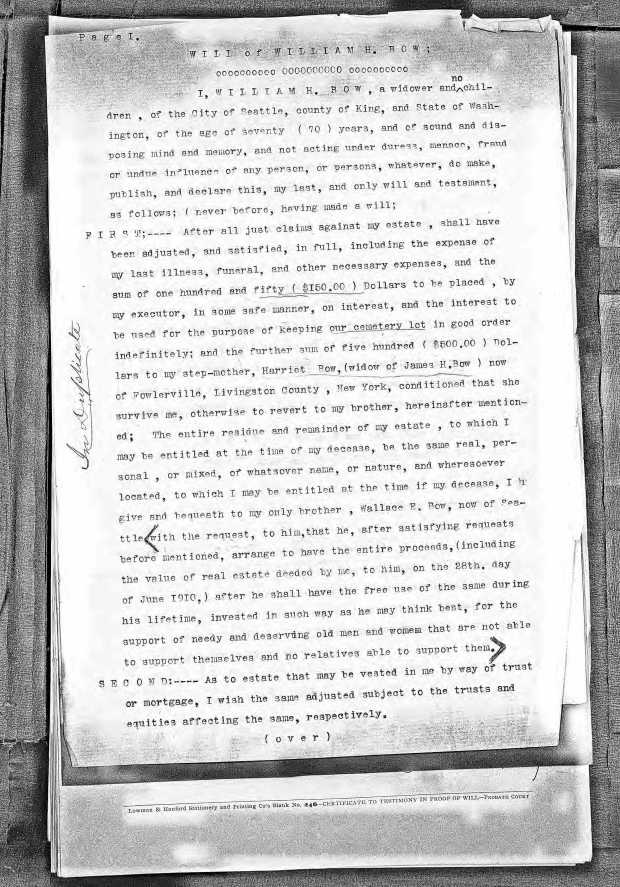 They resided in New York until moving to Seattle in 1890.

Abbie died in 1906 and Wallace remained a widower until 1922 when he married the widow Margaret (Stewart) Espy in Tacoma, Pierce County, Washington.

So, who are James H. Bow’s parents?  Good question.

We believe he belongs somewhere within the family of Abraham and Elizabeth (Arnold) Bow who were married on October 18th, 1785 in Middletown, Middlesex County, Connecticut.

2. Abraham and Elizabeth’s son Abraham and Phebe (Stanford) Bow were married in 1810 in Pittsfield, Massachusetts. There is a four year gap between their children where James could fit.  Catherine was born in 1810 and Eliza in 1814, both in Pittsfield.  However, they moved to Mahoning County, Ohio between 1822 and 1829 and there is no indication the family was in Livingston County.

3. Abraham and Elizabeth’s son William and Phebe (Nichols) Bow were married in 1814 in Pittsfield, Massachusetts and moved to Livingston County in 1819.  If Phebe was William’s second wife, James H. could be his son.

4. Abraham and Elizabeth’s son Charles and Lydia (Bills) were married in 1809 in Pittsfield, Massachusetts. There is a five year gap between children where James H. could fit.  Charles Jr. was born in 1811 in Pittsfield, Massachusetts and Horace was born in 1816 in York, Livingston County. Charles Sr.’s executor, Albert, had to make a trip to New York in 1845 to disburse the estate.  Unfortunately no heir names are recorded. James H. could be their son.

Please leave a message in the comments section if you have any thoughts on the lineage of James H. Bow of Livingston County, New York.

P.S. If you are wondering why there are minimal newspaper clippings in this post, it is due to a ransomware attack on Tom T’s wonderful website. You can keep up with Tom’s restoration progress on his Facebook page.