We’ve been ruminating on the life of Sarah Bow for several years.  Here’s what we know:

Sarah was born 20 Jun 1662 in Middletown to Alexander Bow and his first wife Sarah.

In October 1674 we find her baptismal record:

April 10th, 1681 finds Sarah (Bow) Demmon admitting to fornication with the man who is now her now husband.

We find no record of her marriage to Jonathan Demmon (also Demming, Deming, Demmen, Demmon, Dimin, Dimon, Damen).  This isn’t unusual; marriage records for the colonial period can be spotty. 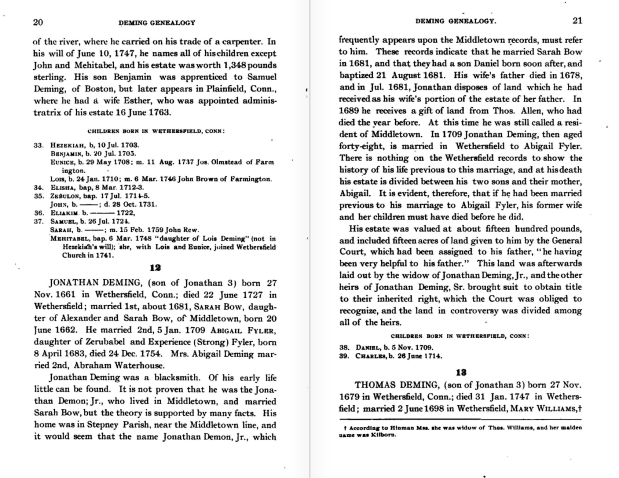 I believe these genealogies are wrong.

Here’s my reasoning and supporting evidence:

The time between Daniel’s baptism in Middletown and death in Wethersfield at age 24 indicates we have the correct “Daniel son of Jonathan” but the incorrect Jonathan. I say this because the record clearly states Jonathan is deceased before Daniel’s death.

Also, two entries below Daniel’s death we have the birth of Daniel son of Jonathan and Abigail.  This is why I believe there are two separate Jonathans; one married to Sarah Bow and deceased by March 1704/5 and one married to Abigail Filer & had a son in 1709.

A search for birth records for a Jonathan Deming in Wethersfield who is close in age to Sarah Bow indicates two possibilities: 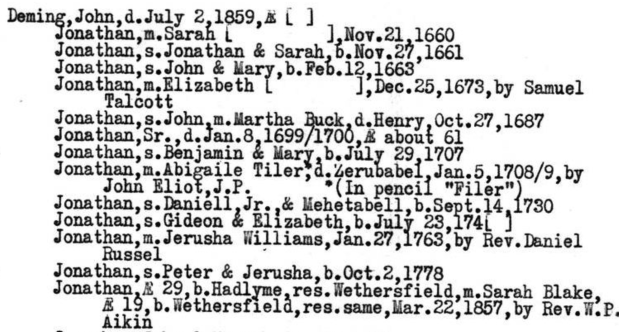 Reading the records as they are transcribed:

There is no marriage recorded for Jonathan born in 1661 to Jonathan & Sarah.  Maybe that’s because he was living in Middletown and married Sarah Bow there?

A further look at Wethersfield records reveal the following:

I believe the above church records outweigh any secondary or unsourced references. Sarah “Baer” doesn’t particularly bother me as I can see how Bow could be read as Baer, although I’d prefer to read the handwritten document instead of a typed transcript.

I believe the most reasonable Abraham Watrous of Saybrook to become Sarah’s second husband is the carpenter Abraham, son of Jacob, widower of Rebekah, and 20 years Sarah’s senior:

I believe it is highly unlikely Abraham and Sarah had offspring.

Working by process of elimination, how many women named Sarah from Middletown with:

I believe the evidence is clear: Sarah (Bow) Deming Waterhouse is the daughter of Alexander and Sarah Bow, is the wife of Jonathan Deming and of Abraham Waterhouse, had one child with her first husband, and lived to the grand old age of 92.