Ralph must have received a somewhat advanced education to became a Civil Engineer.  By 1850 his had completed his schooling and was living in Ellenburg, Clinton Co., NY with a younger brother, Francis William Bowe, in the home of Freeman and Emma Hawkins. 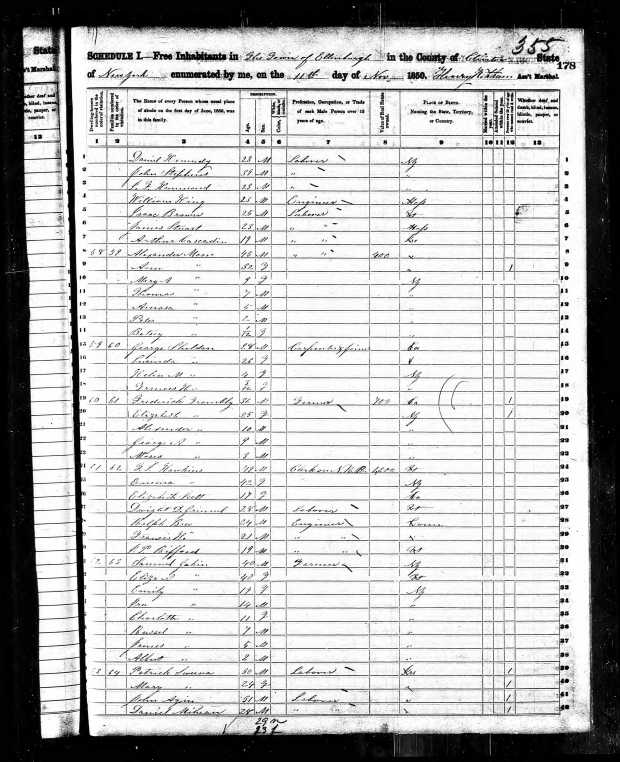 It’s interesting to note that another Bow family was living and farming in Ellenburg in 1850: John, age 26 born in PA, and his wife Susan (Begor) Bow, age 24 born in NY, and their 3 oldest children John Quincy Adams, 6, Ellen M., 5 and George Wellington Bow, 7 months. I have no idea if this family is related.

Mary Dyer is a daughter of Horatio Dyer and his wife Electa Ann (Southworth) Dyer. Mary had 3 siblings: Solon Southworth, Horatio Franklin, and Caroline Electa. Horatio was in the mercantile business most of his life and turned the business over to his sons which they continued for several decades.

I haven’t been able to find a marriage record for Ralph and Mary which leads me to conclude they were married in NY rather than MA (NY is notoriously stingy when it comes to publishing vital records) sometime between 1850 and 1855.

Their only child, William Horatio Bow, was born in Agawam, MA circa 1854.  By 1855 Ralph had contracted consumption which, in those days, was a certain death sentence so Mary took baby Willie to her father’s home in Springwater, Livingston Co., NY.

With his wife and son safely away, Ralph got his affairs in order.

Ralph wrote his will on 17 Aug 1855 leaving specific items to his father, brothers, and sisters before setting up a trust for Mary and Willie.

I think it’s neat to see a persons handwriting so here is Ralph’s signature:

It looks rather unsteady for a 30 year old, but considering his advanced consumption it’s a wonder he could sign it at all.

You can see Ralph’s tombstone here.

His father William and cousin George Granger Bow were required to submit bi-annual trust ledgers for audit. While the ledgers are rather uninteresting, I did find one little nugget of information:  Ralph not only owned real estate in Massachusetts, but also in Iowa (the trust had to pay the annual tax).

Between June 12th and September 1st 1863 Mary had remarried to a widower named Marcus Austin.  Willie lived back and forth between his mother’s new husband’s home in Dansville, NY and his grandparent’s home in Agawam, MA; probably to get the most advantageous education.

By 1880 Willie was now William and living in Des Moines, IA.  On August 18th of the same year he married the 18 year old Jane “Jennie” Morton Page.

Jane was born on 30 Mar 1862 in Carlinville, Macoupin Co., IL to Egbert & Caroline (Morton) Page.  Egbert was born in Rutland, VT and joined the Lambda Iota fraternity while at the University of Vermont.  He was supposed to graduate in 1848 but had to drop out in 1847 due to ill health.  He later entered the seminary in Manchester, VT but it didn’t seem to stick. In 1851 Egbert moved to IL and became a merchant.  1852 saw Egbert and Caroline get married and they soon began raising a family.  In 1869, when Jane was 7, the family moved to IA and Egbert became an insurance agent.

Mary Lois (Dyer) Bowe Austin died in 1907.  One son with her second husband survived her.

Jane stayed on in IA for a few years but moved to Milwaukee, WI to live with her brother and widowed mother.

Ralph and Jane’s daughter Caroline married the widower Bennett “Benny” Griffin, a violinist and orchestra leader, on 26 Jun 1919 in Chicago.

Jane and son George moved to Akron, OH in 1921 where he worked for Goodyear Tire Company as a traffic manager.  On the day before Christmas 1925, Jane and George drove to Bennett & Caroline’s home to spend the holidays.  Jane passed away there two days after Christmas at age 63.

Ralph died in 1938 in Michigan with no children. 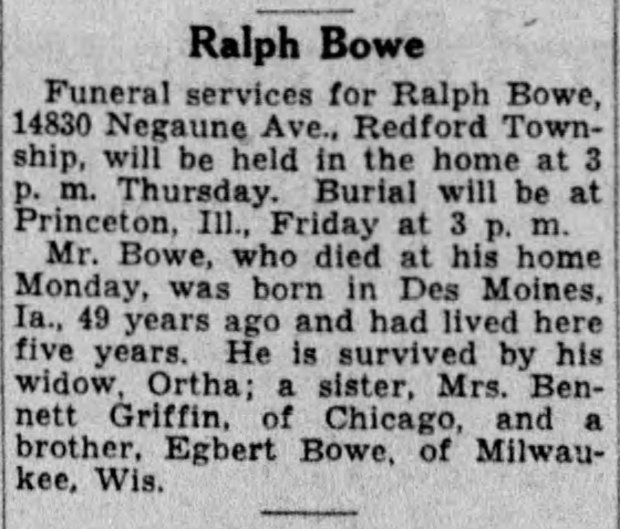 George died in Appleton, WI in 1948 and like Ralph, left no children. 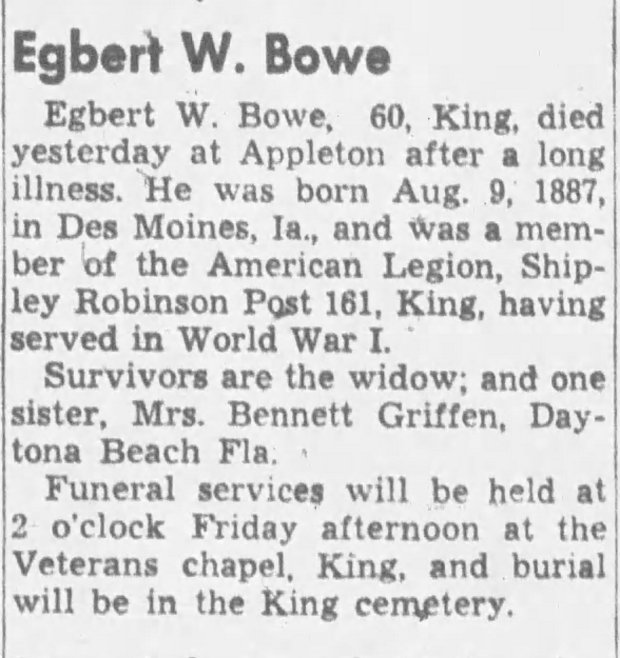 Caroline Morton (Bowe) Griffin, widow of Bennett Griffin, spent her winters in Florida beginning in 1935 before deciding to remain there permanently.  Below is a photo of her at the Hialeah Park opening on January 10th, 1940:

A Caroline B. Griffin died in Volusia County, FL in Jul 1960 but we haven’t been able to locate a second source to verify if this is the correct Caroline. 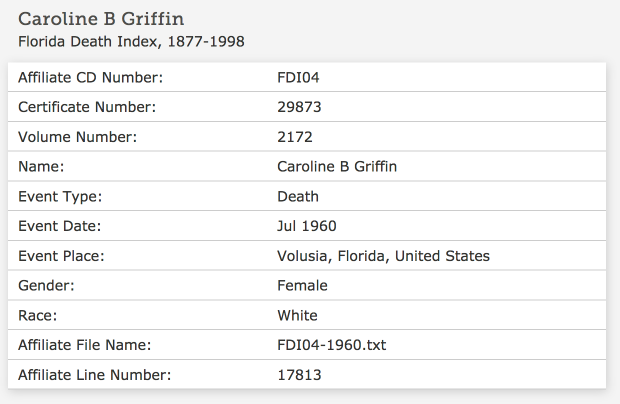 Well, that wraps up the Ralph Bowe family.  Ralph only had William and William’s three children were all childless so Ralph’s line ends here.